Each year, Holy Cross honors up to four graduates with the Alumni Association’s highest honor, the In Hoc Signo Award.  First presented in June 1960, the In Hoc Signo Award is an expression of respect and admiration for those alumni who have given most generously of their time and talents to Holy Cross. Winners have distinguished themselves by their dedicated, outstanding and lengthy service to the College, alumni organizations, regional clubs or class.

Any living alumnus/a of the College who has rendered and volunteered such meritorious service to the College, any of its alumni organizations or his/her class, by unusual, extraordinary, faithful and continued efforts, or in promoting and enhancing the prestige and reputation of the College and its Jesuit mission.

Service rendered by an alumnus/a as a compensated employee of the College, professional and business achievements and benefactions and donations shall not qualify as meritorious service and do not represent or shall be considered eligible qualifications.  The president of an alumni organization, an employee of the College or a member of the Board of Trustees, while serving as such, may not be nominated for the award.  The Committee shall not consider any nominee endorsed formally by the board of directors of a regional alumni club or other organization.  The award shall not be made on the basis of class, geography, gender or race, but solely for meritorious service. View the complete list of In Hoc Signo Award recipients » 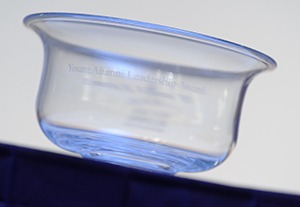 Established in June 2011, the Young Alumni Leadership Award recognizes a young alumnus/a who has graduated within the past ten years and has demonstrated outstanding service to alma mater through the Alumni Association's committees and activities, regional club or class. View the complete list of Young Alumni Award recipients »